Early days and recent past

Our church was founded by Baptists from Broadmead Baptist Church. They formed a new mission to serve the expanding population in the Horfield area. The first worship meetings were held in a house in Thornleigh Road. 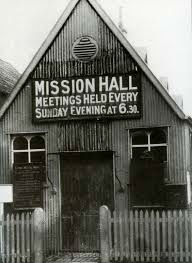 1889 An iron chapel Mission Hall - nicknamed the Tin Tabernacle - was put up on Gloucester Road.

1894 Land on Gloucester Road was purchased - our  present site - for a new building of "a more permanent nature".

1895 The School Chapel in Brynland Avenue, currently our Griffin Hall, was opened. The congregation continued to grow and the need for a larger church soon became apparent. 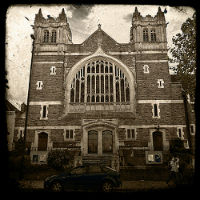 1901 The new HBC was dedicated having been built in a year. By 1911 the construction costs were paid off.
The church, now a Grade 2 listed building, has an Arts and Craft feel. It is constructed of Bristol rubble stone with dressing and towers of Bath Stone. The interior has excellent woodwork, with galleries on three sides supported by iron columns. There is a very well carved perpendicular pulpit.

1914 - 1918 The Church experienced many challenges and much sadness during the First World War. The minister served as a chaplain and forty church members were killed in action. The Church supported a family of Belgian refugees in Bristol during the war years, paying for their housing and upkeep.

1922 It was resolved to create a permanent memorial to those lost in the war.  The Memorial Building adjacent to the Church was built and opened.

1942 HBC celebrated its fifty year anniversary. Christian faith in action saw the Church use its buildings as temporary accommodation for those made homeless by air raids and house blood transfusion services in the Memorial Building.

HBC has always been at the heart of its community. More than 500 people use the buildings each week through involvement in worship, church and community organisations.